Service At Any Cost 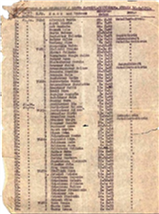 The 1993 movie Schindler’s List tells the story of Oskar Schindler, a German businessman who saved the lives of more than 1,000 mostly Polish Jews during World War II. Directed by Steven Spielberg and winner of seven

academy awards, the film rose from what was originally thought to be a money loser with a very modest budget to be a global blockbuster. The movie is based on the true story of Schindler who arrives in

Poland, drawn by the opportunity to reap great financial rewards from the German war effort. As he borrows and bribes his way to success, Schindler begins to respond to his conscience’s call to save those ruthlessly condemned to the work camps or death. While shrewdly maintaining his relations with the Nazis and the SS, he hires as many Jews as possible to staff his factory, convincing the authorities it will benefit the Reich’s military conquests. He does all of this at the risk of both his life and fortune, the latter of which was exhausted by the end of the war. He served sacrificially at a time when self preservation was almost everyone’s primary urge. Schindler’s sacrificial efforts, while leaving him broke, eventually brought him honor. The Israeli Government gave him the title Righteous Among The Nations and a burial on Mount Zion. He was the only Nazi to be accorded this honor.

In another book written by and to Jews, Hebrews in the New Testament calls every Christian to similar sacrificial service. “Keep on loving each other as brothers and sisters. Don’t forget to show hospitality to strangers, for some who have done this have entertained angels without realizing it! Remember those in prison, as if you were there yourself. Remember also those being mistreated, as if you felt their pain in your own bodies.”

We are challenged to work with God to bring redemptive beauty and light in the midst of darkness. Entering in to such service not only brings light to others; it brightens our own souls too. And where do we find motivation for this service? From God himself, and from Jesus Christ our “older brother.” He is The One who set aside his position and honor to serve us, even when we were his enemies. Only in his strength can we find the possibility to serve in this way.